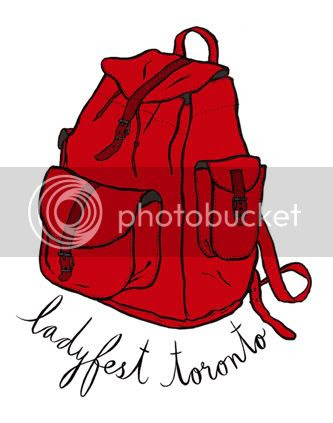 There are so many more updates and a full schedule coming soon!

See you soon!
Posted by Ladyfest Toronto at 9:28 AM 3 comments:

Ladyfest Toronto is an annual non-profit interdisciplinary festival organized by a grassroots, open, do-it-yourself collective of feminists each dedicated to having fun with feminism and putting good politics into practice through art. Each year the Ladyfest Toronto collective organizes a festival of art, music, performance, poetry, and politics meant to celebrate community and the projects and accomplishments of Toronto feminists. By offering a space to showcase some of the many Toronto artists dedicated to making their work pro-feminist, political, resistant, and inclusive, Ladyfest hopes to work as a hub of feminists activity that connects existing communities and generates new ones. In addition to practicing a non-hierarchical method of organizing the festival, our collective operates from a sex and body positive, non-exclusive, anti-oppressive, pro-feminist, politically charged framework and embraces all feminist peoples. We are absolutely dedicated to making the entire festival accessible, inclusive, and safe in every way. We hope that by making spaces for community members, artists, and musicians to share and perform we can open up places from which Toronto’s various pro-feminist political voices can be heard, where new communities can be made, and existing ones can work in coalition on shared projects and toward common social and political goals. Ladyfest is not just an annual festival; we hope that it is the kind of event that can generate new projects, possibilities, and communities and above all proliferate politics without pretentiousness. Ladyfest Toronto operates according to several key values; these include accessibility, DIY-ing, positivity, exposure, connection, and inclusion.

How did Ladyfest Start?

The festival began in August of 2000 in Olympia, Washington, the home of the Riot-Grrrl movement. It was a woman-organized and woman-run event that featured performances by bands, spoken word artists, authors, and visual artists with pro-feminist attitudes. It also included workshops, panel discussions, and dance parties. The 2000 festival had a strong momentum, inspiring women from around the globe to organize similar festivals in their own communities. In the last seven years Ladyfest's have taken place in North and South America, Europe, Asia and Africa. Canadian cities that have hosted Ladyfest's include: Vancouver, Guelph, Toronto, Halifax and Ottawa. Although each city puts its own spin on Ladyfesting, all Ladyfest festivals belong to a global web of feminist communities each devoted to similar social goals and celebrating in solidarity with each other.

Where is it going?

Next year will be the 10th anniversary of Ladyfest internationally. That’s why this year in Toronto the collective has agreed to pay more attention to where our Ladyfest is going in the future. Sometimes politics need to be reframed, and since Ladyfest’s purpose is representation, politics without pretension, inclusion, and exposure for pro-feminists arts and activists it is important for the collective to make sure the festival is doing what it’s supposed to. For the Ladyfest Toronto collective that means being in dialogue with other communities, causes, and organizations, as well as volunteers and festival attendees, to have open conversations and get feedback about what Ladyfest Toronto is doing to and for our city, its artists, and its community members. The better we know about what Ladyfest is doing for those in our community, the better we can know what it ought to do in the future. To make this happen Ladyfest Toronto ’09 is generating a Community Dialogue Initiative, a forum for open discussion with anyone interested about the Ladyfest presence in Toronto, what it does, has done, and should do in following years.

Hey!
This is just a test for our paypal to make sure we can paste buttons here.
However, if you ever want to donate to helping make this festival possible, you can do that here!
We'll mail you an extra special home-made thank you card!
Posted by Anonymous at 3:56 PM 1 comment:

This year's festival will take place November 25-29 in various locations in Toronto! Our festival is completely wheelchair accessible and we are working towards putting together an entirely free festival.

New Dates!
Ladyfest 2009 will kick off November 25th with Grannyboots at the Gladstone Hotel Ballroom! We are still organizing the rest of the events for the weekend following.
Volunteer with Ladyfest
We are always looking for people to organize with us! The first meetings for potential committee volunteers will take place near the beginning of September. All committee meetings will take place at free and wheelchair accessible spaces. If you are interested in joining a committe (such as arts, music, film, fundraising), or you want a smaller commitment, email your name, interest, and availability toladyfestvolunteer@gmail.com

Participate in Ladyfest
We are no longer going through a traditional application process but if you are an artist, performer, workshop leader, filmmaker, or writer and you think that your work might suit Ladyfest Toronto, then please email us some information about the type of work that you do and we will be in touch!